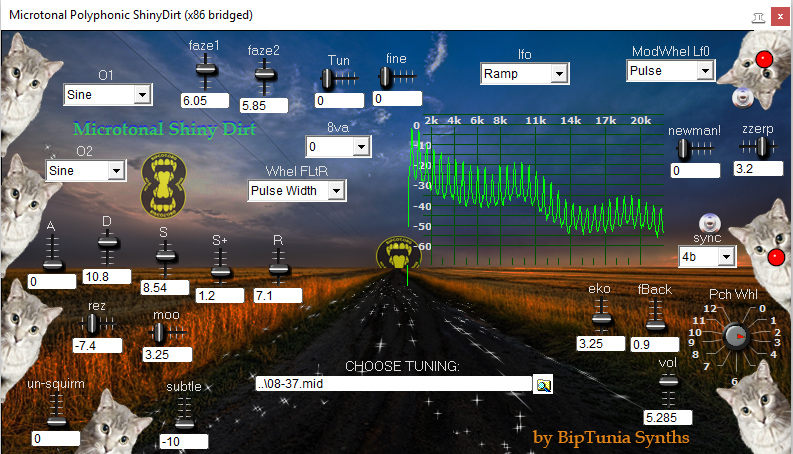 (Check our new record that uses this synth extensively. Free to listen or download: Microtonal Cats from Alpha-Centauri)

YouTube walk through of this VST and my other microtonal VST.

Note: if you want to use this synth non-microtonal, use the Tuning setting of 12 EDO.

Other VSTs we make, including some microtonal

It’s very easy to use. Yet it is robust, and will give you power.

TIP: Don’t be afraid to experiment with microtonal music if you don’t yet understand the math.

While eventually learning the math is good, and we included resources for that. And with this VST, no math is even needed to start making cool microtonal music.

In fact, an ability to create compelling music with a tiny bit of understanding of microtones will go much further than the opposite.

Microtonal Polyphonic Shiny Dirt is microtonal and polyphonic, but is also all about the mod wheel. The mod wheel does something different on each pre-set.

Unzip and put the folder \MicrotonalPolyphonicShinyDirt inside your DAW’s VST folder.

Microtonal Polyphonic Shiny Dirt is a 32-bit Windows synth, but it tested fine on 64-bit Reaper, and of course also on 32-bit Reaper. It should work on any 32-bit DAW, and on many 64-bit DAWs.

Though in 64-bit Reaper, the presets will show up in a second window, like this:

(^ If the window on the right isn’t wide enough to see all the preset names, you can grab either side of it with your mouse, hold down the left  mouse button, and drag the window wider.)

If you can’t even see the main colorful window with the kitties, click the button on the VST picker that says “Show UI” (user interface):

The first 32 pre-sets are microtonal. The rest are in normal tuning, but will retain the last microtonal tuning you used, until you set your own tuning (more on that in a moment).

Each preset has a different tuning, but you can use the picker to add any of the tunings to any of the presets. You can also make your own synth patches. And, if 5,376 tunings isn’t enough, you can add your own tunings. They should be in MTS file format, put into the \MicrotonalPolyphonicShinyDirt folder inside your VST folder. You can make your own scales using Scala, which is free.

The order of MTS files in our presets are set up somewhat randomly, to encourage experimentation. But you can stop using the set tunings in a given preset at any time, and pick your own. You do this by clicking on the file picker near the bottom right, on the “CHOOSE MTS TUNING FILES” section at the bottom, and picking any of the 5,376 scales.

The archive also includes Sevish’s PDFs about many of the tunings, included at his suggestion. They are a great read. Very educational, but not at all dry.

If you read about a tuning you like and want to try it, you can click the file picker icon in the bottom right of the User Interface, circled here in blue:

This will open up the list of tuning MTS files. From there you can just go down the list and try different scales, or you can find specific ones; there is a search function where you can type the scale name. It will bring up your result or results: 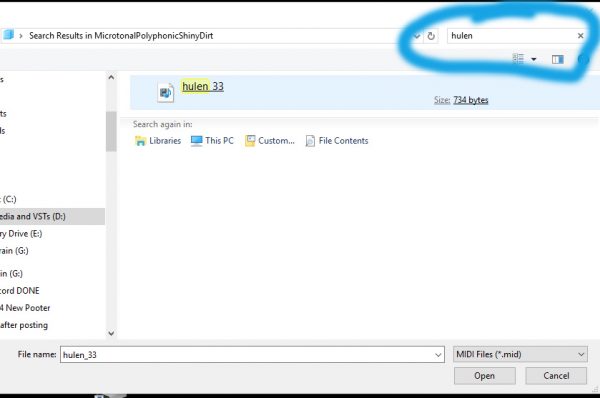 From there, click on the file icon to use the scale. (Where it says hulen_33” in the above image. But it will be replaced by the name you searched.)

Microtonal Polyphonic Shiny Dirt has a cool frequency meter, and. This is a diagnostic tool used while making a VST, but usually removed before outputting for the public. I like it, so left it in. It’s stoney and groovy. But they also teach you a bit about how this all works, and what audio synthesis actually is.

The mod wheel on Microtonal Polyphonic Shiny Dirt is unique. It controls a combination of sustain, phase mod, and pulse width. It’s somewhat more subtle than many expect from a usual mod wheel, but very useful in creating a shimmer or vibrato by hand.

We recommend you try patches and tunings you like in different octaves as well. And with single notes, two- and three-note chords, and also try chords with more notes.

This synth will also produce very interesting results with an arpeggiator. Try it!

The pitch wheel on your MIDI controller will control pitch. The amount you can bend with it is different on some presets, and can be changed manually with the “Pitch Wheel” switch.

If you want to donate, there are links on the left sidebar for patreon, Bitcoin, and PayPal. Or you can buy one of my albums for you or a friend, on BandCamp, or any of these services:

Jef McClintock showed me how to add the microtonal function. (Though I simplified it.) Thank you, Jef!

And thanks to Nora Leader for helping me get rid of the errors in file picking the MTS files.

The MTS files for the tunings came from these three sources; Scala archive, Xen-Arts, and Sevish. Thank you.

Thank you to Manuel from Scala for help on how to convert his 4000 .scl files to .mts files.

Microtonal Polyphonic Shiny Dirt was made with SynthEdit.

Check out our other free VSTs here.

Check out my microtonal  music here.

NAMES OF THE 128 PRESETS IN THIS VST:

VST® is a trademark of Steinberg Media Technologies GmbH, registered in Europe and other countries.

BipTunia Synths has been licensed for VST SDK use by Steinberg. Agreement countersigned by Steinberg on August 23, 2018.

This site uses Akismet to reduce spam. Learn how your comment data is processed.

HERE'S 24/7 RANDOM PLAYER OF ALL OUR SONGS:
Go here if that player ^ doesn't work, or if you want VLC / IceCast links and song info.
Subscribe.....

BipTunia is featured in
$30 Music School:

GET IT HERE ON AMAZON.
Kindle Edition on sale for 5 dollars.

For doing a live streaming show, use HiredHosting, the EXCELLENT ShoutCast / IceCast service we use:

Get our cool shirts 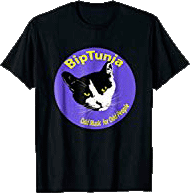 Buy us a cup of coffee, or some computer memory. Or cat food. Or Google Ads. Or whatever. NOT tax-deductable, but makes you feel good about yourself.

Shop Amazon UK through the Freedom Feens link. Bookmark and use whenever you shop Amazon.

Shop Amazon Canada through the Freedom Feens link. Bookmark and use whenever you shop Amazon. 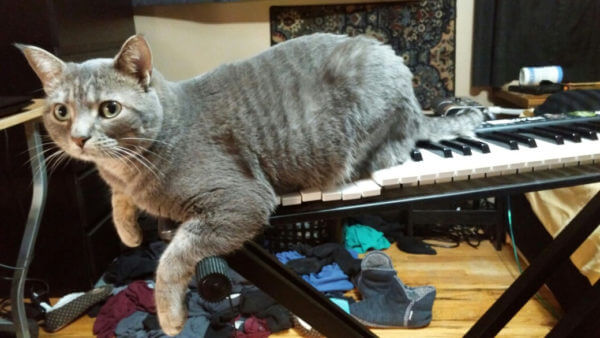 ....and then tell your friends.

We have a free Android play app. Get it and listen non-stop to every BipTunia song ever, on a random loop! Updated when we have a new song or album! We highly recommend our web host: